The Public Relations Institute of New Zealand has recognised excellence in the fields of public relations and communications, with the induction of six new Fellows.

Fellows demonstrate a high degree of competence in the practice of public relations and are nominated based on their significant contribution to the enhancement of the public relations profession.

The new Fellows were inducted by PRINZ Board Chair, Fiona Cassidy, at the annual PRINZ Awards gala dinner held on the 20 May 2022 in Auckland.

Images of each new Fellow are attached and their nomination citation follows:

Deepti’s rise in the PR profession is a heart-warming story of a person who started out in 2008 on the ground floor working in the PRINZ Office as the Institute’s professional development and communications manager with Executive Director Paul Dryden. Today she is a recognised industry leader – the Chief Examiner of the PRINZ Accreditation in Public Relations (APR) programme, a PRINZ Awards judge, and a professional development course presenter specialising in Measurement and Evaluation and Intercultural Competency.

By day Deepti is a lecturer in public relations at AUT University where she manages the student-led PR agency Outside the Square. In this paper, students work with real-life clients and Deepti guides them to use planning, evaluation and reflection as critical PR tools.

In her “spare time” Deepti takes on a myriad of other roles to advance the PR profession. Before being appointed APR Chief Examiner in 2021 she was for many years an APR mentor, viva voce examiner and moderator. From September 2018 to August 2019 she was project manager for the World Public Relations Forum – an event that would have attracted around 600 PR professionals from around the world to Auckland but was unfortunately derailed by Covid.

While she has worked as a communications practitioner – including in corporate communications for Unitec and in advertising and feature writing in her homeland India before coming to New Zealand – Deepti’s passion is academia and she is currently pursuing her PhD on the occupational culture of New Zealand’s public relations consultancies.

With the expertise she has developed over the last 15 years, Deepti has become a go-to person for PRINZ as a professional development trainer, organiser and thought leader. Deepti is one of those beautiful, obliging people who would do anything for you. We are delighted to welcome her to the PRFINZ College of Fellows – an honour she has earned and thoroughly deserves.

Allan holds a Doctorate in English from Oxford University, the completion of which demonstrates a degree of stamina and determination as well as perseverance and intellectual capability.

While Allan has no qualification in public relations, his capacity for critical thinking and his capability with the written word, means he has practiced the craft for rather for a long time: over half his life.

Allan’s competence is best measured by his clients, many of whom rely on his services, and some for over 25 years.  Allan will tell you that he has ‘acquired what skills he has through the grace and favour of clients, who have kindly allowed him to work on their behalf’. But what Allan really found was a professional calling in advancing special interests, protecting reputations and solving problems.

Allan also finds joy from the capable people whom he has been lucky enough to employ. The latter represent his legacy: at last count over a dozen people who began their careers in public relations with him have gone on to start up their own public relations consultancies.

Allan still maintains cordial relations with over half of those, with many being members of PRINZ. He was a member of IABC for a decade and Chair for several years and supports emerging practitioners by running courses on financial communications at tertiary institutions and for PRINZ and working with the Ministry of Education on degree accreditation. He deals honestly with his clients, attempts to do well by his colleagues and, while he may not be universally admired, he has never brought the profession into disrepute.

A mum, wife, business owner, friend, boss, colleague, amazing wāhine; Jacky James puts people and community at the heart of everything she does.

A managing partner of award-winning PR consultancy The Shine Collective, Jacky is a long-time supporter of PRINZ. She has been a member since 2004 and achieved APR in 2011; a member of the of PRINZ National Council in 2016 and has regularly presented at PRINZ conferences and webinars.

Through her broad range of experience both in-house and consultancy roles, Jacky has cemented herself as a crisis communications specialist. In addition to winning multiple PRINZ Awards, Jacky is a recognised business leader, including being on the board of the Rotorua Chamber of Commerce.

The Shine Collective has offices in Rotorua and Tauranga, and a portfolio of clients across New Zealand and Australia, and works across corporate, iwi trusts, local government and B2B.

Jacky has a genuine passion and understanding of her community and often goes beyond the brief or scope for clients.

Generous with her time and wisdom, Jacky has mentored employees in all aspects of communications and public relations and encouraged and guided them to excel and stretch themselves further in their careers. She encourages her staff to attend PRINZ courses as part of their professional development and has supported staff to achieve their own APR. Jacky has forged a pathway for younger team members, including summer interns and communications coordinators, to develop their communications careers.

Jacky James is the epitome of an ethical, gut-trusting, community focused, successful communicator and leader in the industry. She is dedicated to her craft and the building of a workspace that encourages personal growth. And a community where quality communications is at its core.

Elaine is an outstanding public relations and communications management professional and her track record in delivery speaks for itself.

Until she became the PRINZ Chief Executive she spent over 25 years working in the private sector, both inhouse and in consultancy roles. She held senior roles with Sky Television, Cathy Campbell Communications, and IBM to name a few.

As a people manager she has always worked hard to ensure that her staff have strong professional development plans in place and use the Code of Ethics as the umbrella under which they do their work.

As the PRINZ Chief Executive she slowly reviewed and improved all member offerings. This included the continuing professional development programme, the Acccreditation in Public Relations (APR) programme, revamping the PRINZ Awards system and developing and broadening the understanding of work of public relations with universities, other industry bodies and other key stakeholders.

She is a strong advocate for the profession and a thought leader when it comes to trends and understanding of where the sector is going.

Elaine personifies excellence, ethical standards and a commitment to making a difference to our profession.

Anne-Marie is the consummate communications professional.

She has worked on many high-profile projects at the Ministry of Health, Ministry of Social Development and Christchurch City Council during more than 20 years in the communications industry.

With her Christchurch City Council colleague Linda Bennett, Anne-Marie won the Government/ Quasi Government category in the PRINZ Awards 2015, and also the Supreme Award that year.

In her current role as Terra Cat’s Communications Manager, she has shown the impact a communications professional can make within an organisation. She has supported Terra Cat’s new overseas owners and CEO with internal and corporate communications that saw employee engagement increase from -14% to +27% in just over two years. Communication within the business and a sense of connection with senior leaders are consistently in the top three reasons why employees recommend the business as a place to work.

Anne-Marie has a genuine passion to see people entering the public relations field, and to support them through their first few years of practice. She has developed a positive relationship with the University of Canterbury’s School of Arts and their Professional and Community Engagement Programme (PACE). The University of Canterbury has asked her to speak about her public relations career to prospective Bachelor of Arts students at careers evenings for the last three years.

She is committed to her own professional development and achieved APR in 2013. She has also given generously of her time to support others in the industry. She has been an APR mentor, a Prinz awards judge and a Prinz Southern Division Committee member.

Jacquie’s diverse communications career spans writing TV commercials, donning workboots as editor of a logging magazine, through to forming her own consultancy in Nelson ten years ago.

In between she was winner of a PRINZ award in 2012 as part of the University of Canterbury team response to the Canterbury earthquakes, and consulted to leading South Island PR firm Convergence Communications.

Jacquie has acted as PRINZ regional rep for Nelson/Tasman and Marlborough, organising a monthly networking event and been a PRINZ APR mentor. She is a strong advocate for PRINZ membership and for local comms professionals to join PRINZ and undertake professional development via PRINZ.

A very accomplished singer songwriter, Jacquie’s confidence on the stage extends to her public advocacy of the PR profession. She is an active networker and has proudly represented her profession in the Nelson/Tasman region, where she has achieved high-profile recognition among the local business community. Jacquie has also provided extensive pro bono and heavily discounted service to numerous local not-for-profit organisations.

A Google of her name yields numerous news articles referencing her achievements across a range of topics. Jacquie is also a regular generator of diverse content on LinkedIn.

Leaving Christchurch with two young children for a new life in Nelson was a daunting task but Jacquie pushed through and today enjoys the fruits of her labour. A highlight has been helping raise the international profile of the indomitable founder of Pic’s Peanut Butter.

Having worked on and off with Jacquie for many years, including being her counsel as she established her consultancy, I can attest to her extremely high professional standards. There is no question Jacquie takes the PRINZ Code of Ethics very seriously and in 2016 she co-produced a handbook titled Great PR, ethical communication that really works. 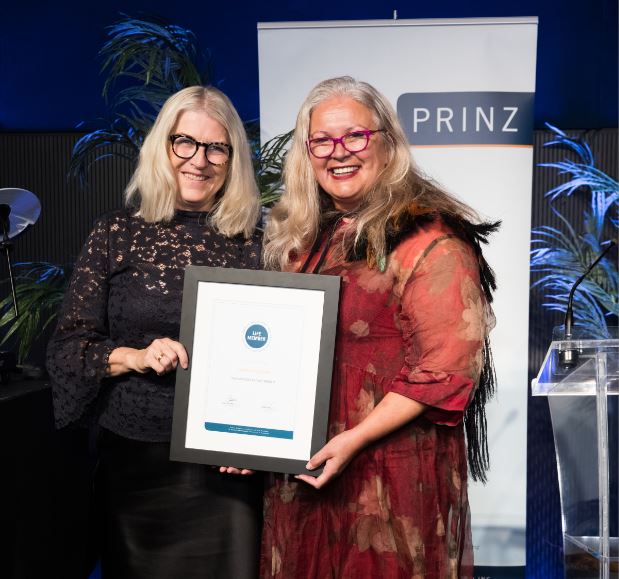 The Public Relations Institute of New Zealand (PRINZ) has awarded Life membership to Claudia Macdonald in recognition of her significant service over 30 years. Claudia… 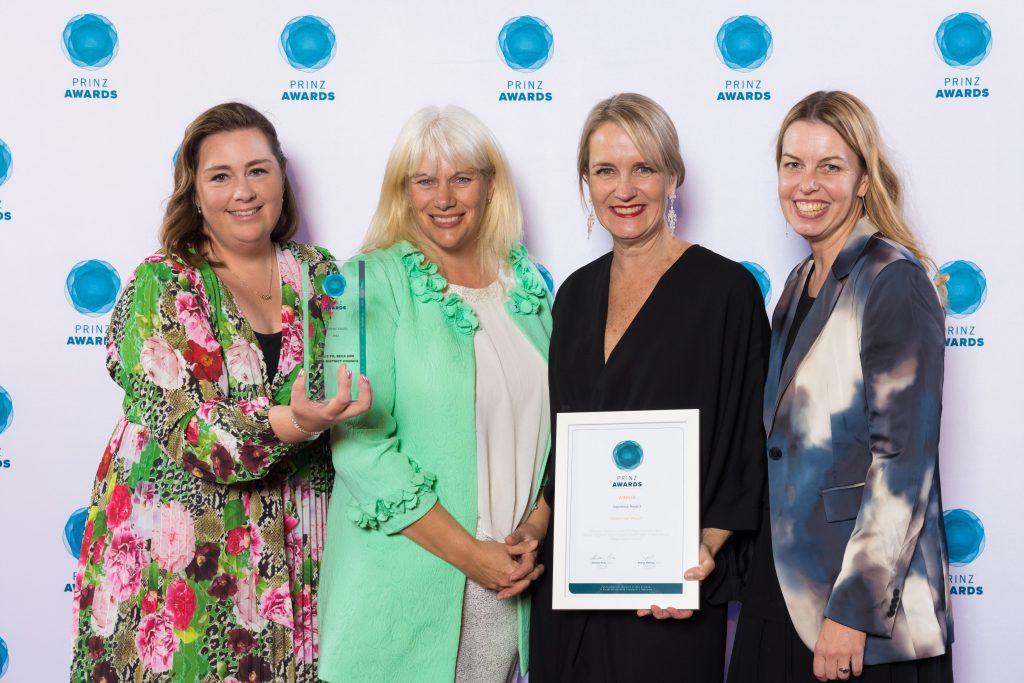