HONOUR FOR PR MAN WHO LINKED BUSINESS AND ENVIRONMENTAL WORLDS 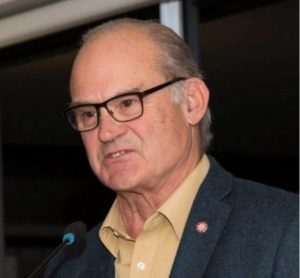 PRINZ Life Member Cedric Allan, a former business partner and lifelong friend, made the presentation, which Rob was delighted to receive.

Rob’s funeral will be at the Holy Trinity Cathedral, Parnell, on Tuesday 17th March at 11am.

Rob was a journalist on the Auckland Star in the early 1970’s moving on to an editorial role with Community Newspapers before joining Cedric in his growing public relations consultancy. This partnership which grew into Allan Fenwick McCully in the early 80’s as former Foreign Affairs Minister Murray McCully was taken in to the partnership along with Auckland journalist John Evans. Other prominent public relations professionals who helped the growth of the consultancy include Malcolm Boyle, Michelle Boag, Blair Harkness, Ross Martin, Mark Unsworth, Victoria Carter, Richard Griffen, Elsbeth Hardie and photographer Lex Kempton.

Allan Fenwick McCully had several offices in New Zealand and was one of the biggest public relations consultancies on a national basis, handling major clients which including McDonald’s, Fletcher-Challenge, Montana, Lion Breweries, Singapore Airlines, NZ Refining, the Pharmacy Guild and many international pharmaceutical companies, as well as work on political campaigns and social issues of the day.

In the mid 80’s the company was looking to open an office in Australia and approached Hill & Knowlton, then the world’s largest public relations group, about purchasing its Australian arm. In the end, Hill & Knowlton purchased Allan Fenwick McCully outright, adding the H&K offices, clients and resources to the AFM offering in New Zealand. However, three of the AFM shareholders were gone within a couple of years, McCully to stand successfully for Parliament, Fenwick – who had been appointed managing director – to pursue his own business interests and Allan to start Phoenix Public Relations in which Fenwick was also a director for a period.

For some 15 years, Rob Fenwick was one of the most high profile public relations consultants in New Zealand during a period of rapid expansion for the profession. He was a great supporter of PRINZ, and the desirability of senior practitioners broadening their communications skills with specialised knowledge as well as a broad understanding of business, politics and how to get things done in New Zealand. His successes have done much to demonstrate this approach, coupled with strong personal relationships, and a warm, collegial approach which won the respect of those with whom he dealt.

On leaving the consultancy world he put his skills to good use in his own businesses, bottled water producer NZ Water and rubbish-to-compost venture Living Earth while also developing a passionate interest in the environment and advising some of the biggest companies in New Zealand on these aspects of their business and also working with government departments. Sustainable business, Antarctica, climate change and saving species from extinction were among his particular interests. He also helped promote the Blue/Green political party.